Hades is a roguelite, action role-playing game, set in the Underworld of ancient Greek mythology. It’s developed and published by Supergiant Games, known for their other titles like Bastion and Transistor. It was released on September 17, 2020, for the PC (on Steam and Epic Games Store) and the Nintendo Switch. For the PC platform, it’s available on Windows and macOS.

Hades is the stern, dispassionate god of the dead and you play as his boisterous son, Zagreus. Something is amiss in the Underworld and the prince sets off, determined to escape and reach the surface of mortals. There’s only one, slight problem…​ Legend has it, “there’s no escape from hell”. 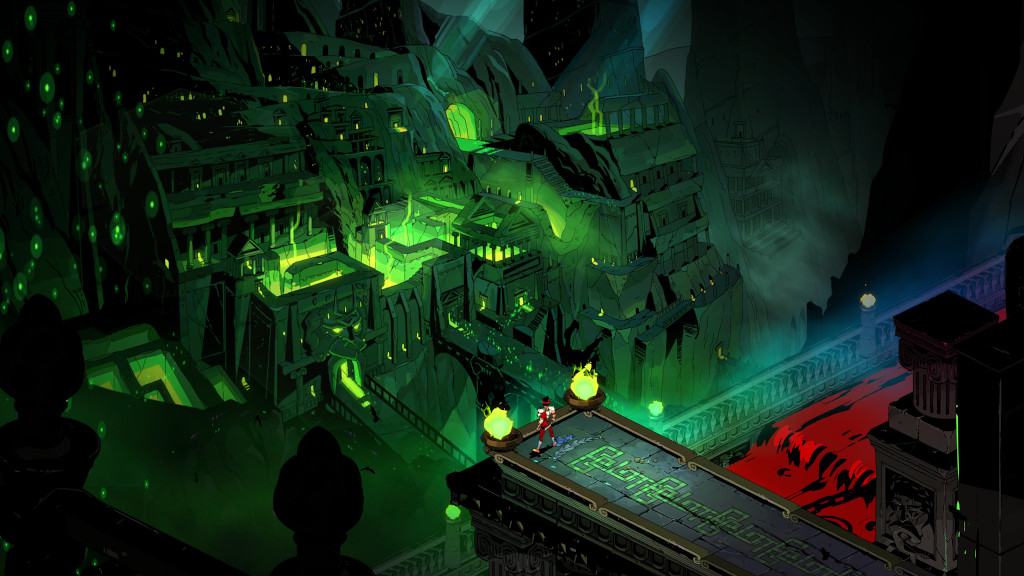 Zagreus gazing at the ever-shifting chambers of the Underworld

Hades is a single-player game, featuring fast-paced hack ’n slash combat presented in an isometric view à la Diablo. As of writing this review, I’ve spent around 150 hours playing this game and fully experienced the end-game content it has to offer.

I’m someone that values gameplay above every other aspect of a game. And I normally don’t start my articles reviewing the story, but in the case of Hades, I’ll make an exception. The narrative is so masterfully interwoven with the gameplay that it becomes an indispensable part of the game and is a large part for the success of this game.

Zagreus on his journey of escaping the Underworld, much to the chagrin of his father, finds himself aided by his relatives, the Olympian Gods. They grant him “boons” expecting him to eventually join them on Mount Olympus. With every failed attempt at escape, he gets pulled back into his home in the Underworld. The story revolves around Zagreus’ struggles and the relationships in his family of Chthonic and Olympian Gods.

The art, story and voice-acting infuses this narrative of ancient myth with renewed life and vigor. Even if you aren’t familiar with Greek mythology, you should have no trouble following and understanding the story. 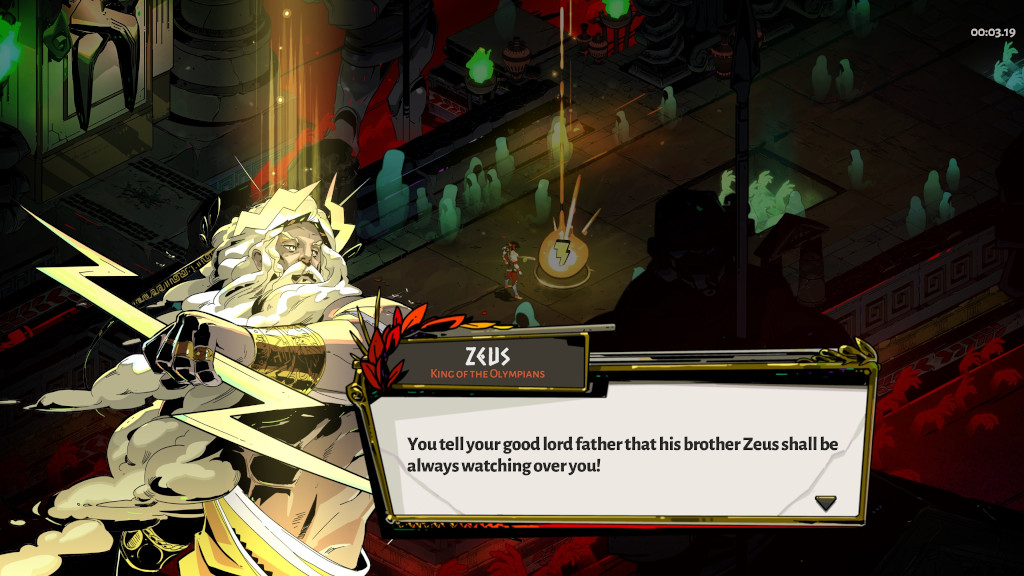 Lord Zeus about to offer Zagreus one of his boons

In the Underworld, you get to interact with various NPCs as you unravel the story. There’s extensive dialogue of interactions all of which are voiced in English. The voice acting perfectly suits every character, portraying complications in a big, dysfunctional family. I can’t remember a game where I liked the voice acting as much as this game. I dare say, it’s better than most high-budget animated movies.

As far as the actual plot goes, don’t expect depth or twists like a Christopher Nolan movie. The plot though simple in the end, is cohesive, easy to follow, vividly presented and interwoven so well with the gameplay. There underlying moral of the story is rather profound.

Depending on your skill level and how you decide to push end-game content, reaching the epilogue of the story can take quite some time. The story progression isn’t strictly linear, with some branching possible. Regardless, there’s quite a bit of grinding involved, so be prepared if you’re solely in it for the story.

Your attempt at escaping the Underworld is called a “run” in roguelite terms. The game is deliberately designed in a way where you die often, especially when you’re new to the game. However, all is not lost on death. With each run, depending on how you fared, you’re able to contribute to your overall progress. Either by investing items from your run into permanent upgrades or by furthering the story.

A run involves completing several chambers of each Underworld region culminating in a boss fight. Chambers typically take a minute or two to complete and a reward at the end. Making chambers bite sized chunks of action is an absolutely ingenious design choice. It let’s you save the game often, allowing for pocket sized play sessions while retaining the progress of your current run. Perfect!

Once you complete a chamber, you’re shown a preview of the reward for the next chamber. The sequence of chambers and their rewards differ and are randomized every run. Often you’re presented with multiple chambers, and your choices aggregate towards your “build” that run. Like choosing whether to increase your health or the damage you inflict. 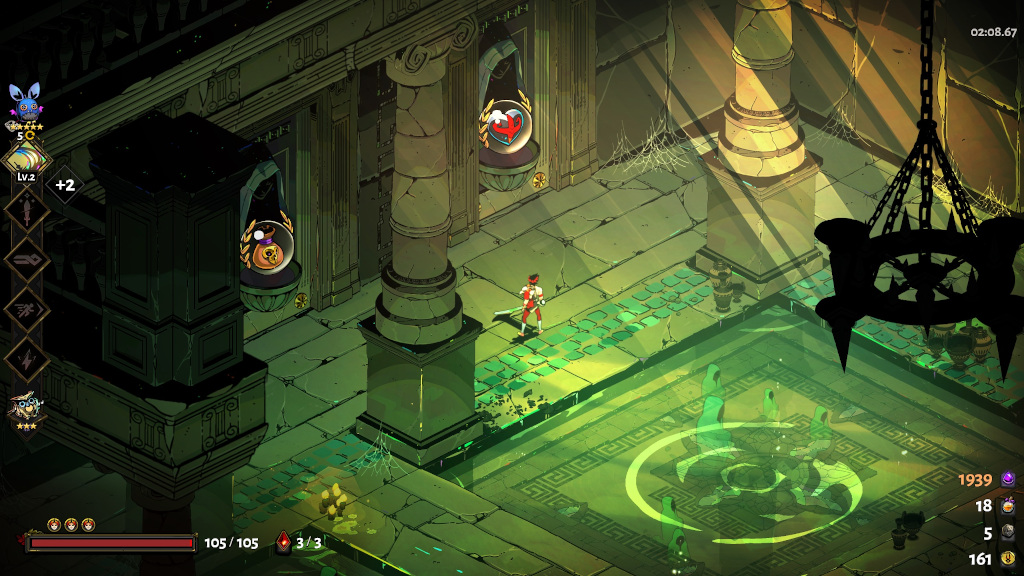 Choosing the rewards for your next chamber

Your run is filled with such decisions. Almost every decision has a noticeable effect and shapes how effective your run becomes. Optimizing runs, despite an element of luck, is par for the course with roguelites. Unlike most roguelites, death though frustrating, never feels like wasted time in Hades. There’s almost, always something to invest into your overall progress. This in addition with the story (explaining and progressing with Zagreus’ repeated failure to escape the Underworld), are major reasons why Hades appeals even to players who are not fond of roguelites. It’s the least punishing roguelite I’ve played and has since become my favorite one by far.

You get to wield several weapon archetypes starting with the sword known as the Stygian Blade. As you progress, you get to unlock more weapons permanently. Once unlocked, you get to choose that weapon for any subsequent run. You can’t change your weapon through the course of a run, although you may get some temporary upgrades to it.

In total, you can unlock 6 weapons, with each weapon having 4 different aspects. Aspects are attributes that facilitate different playstyles for the weapon. For instance, the Nemesis aspect of the sword, grants critical Attack damage chance for 3 seconds after your Special.

Every weapon has an attack and a special move. Weapon aspects provide an alternate moveset or incentives to play the weapon differently. This makes the weapons aspects feel fairly unique to play. Melee-range, mid-range and long-range weapons, enhanced by boons and aspects, offer a wide variety and truly different playstyles.

The combat is very fluid as you flow from one attack to the next. The controls feel responsive, with no perceivable input lag. You have a dash move which allows for some deft movement and dodging. Avoiding environmental hazards, darting around hacking ’n slashing your enemies with supreme style is a satisfying feeling that doesn’t grow old easily.

Your Cast attack, by default, hurls bloodstones at enemies which gets stuck on them for some time. Enemies embedded with bloodstones take extra damage, move slower or may have other debuffs applied to them.

You also have a Call attack. You enable the Call attack, when you choose an Olympian God’s Aid when granted the boon. This is a powerful move that requires building up a God Gauge meter before it can be used. You Cast and Call attacks can both be upgraded by boons, which adds more spice to the flavor your build.

Since this is a single player game, as is usually the norm, there are a couple of difficulty settings available: God mode and Hell mode.

Hades is a beautiful looking game. There’s no two ways about it. Its contemporary, almost anime-like style fits its modern take on ancient Greek mythology.

The game uses Alegreya Sans as its primary font.⁠[1] It gels well with the game’s slightly cartoonish art style. If the game had a grim, gory and subdued style à la Diablo, it would require a harsher, more serious font. But Hades doesn’t establish a serious atmosphere the way Diablo does, yet somehow it feels sufficiently hellish. 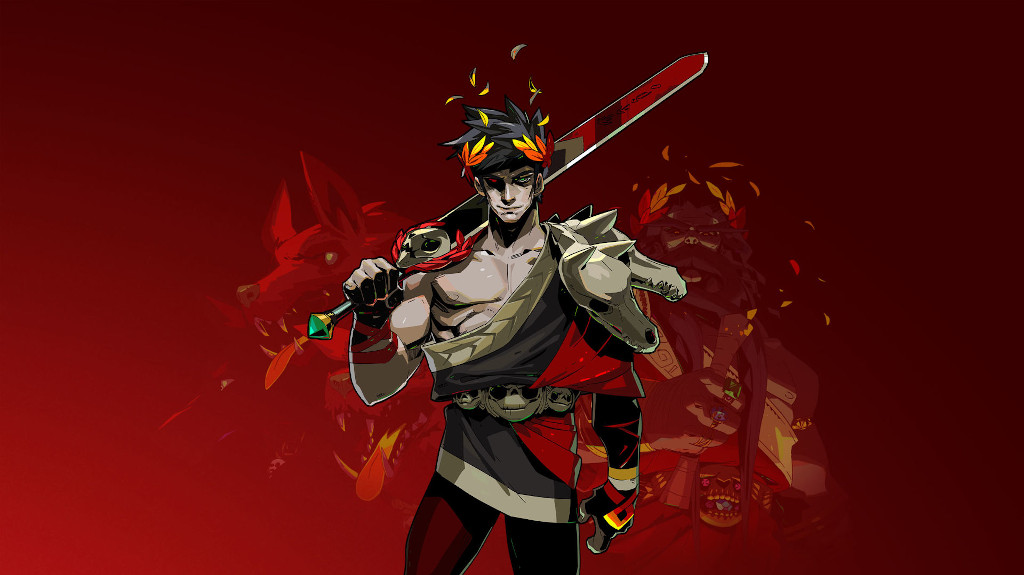 As far as in-game art is concerned, it’s detailed, well lit and clear. They’ve managed to keep the acid-trip levels of colors and effects to a minimum. It still gets chaotic at times, but for the most part, I had no trouble visually following what was going on even in the heat of battle. My only gripe is, I would occasionally lose track of the cursor despite the “bright cursor” setting. An option to pulse the mouse cursor brightly with a multi-colored aura might help.

Darren Korb and his team did a fantastic job with the music in this game and deserves a special mention. The game’s original soundtrack has been released officially on YouTube if you’re interested. The audio adequately contributed to my immersion in the game. I dislike a few of the sounds, like the Rail firing sound in particular, is a tad too shrill. But for the most part I found the sounds providing ample feedback to keep me interested.

Hades sold 1 million copies within three days of its release.⁠[2] Upon release, it was priced at around $20 (US), which I think is a fair price for this game. The game has a lot of replay value for a single-player game. It has an active speedrun community, so if you’re done with the end-game content, you can even give speedrunning a try.

I still wouldn’t rate Hades as highly as Hollow Knight but it’s certainly up there, though the two games are fundamentally different. Hades delivers on many aspects almost flawlessly. The story, its narration, presentation and how it ties in the gameplay is certainly top notch. The gameplay is not really lacking in any significant way.

I feel a game like this would greatly benefit from a major expansion DLC despite it being fairly complete. There are still several Greek gods that aren’t in Hades and I’m confident they can find convincing ways of continuing the story. However, Supergiant Games have stated that after the release of Hades they are taking a much needed break.⁠[3] This is understandable given the incredible amount of work that has gone into this game, but they don’t have a history of releasing DLCs for any of their previous titles. So I don’t really have much hopes for DLC.

If you like hack ’n slash style games and don’t mind replaying content several times over, either to experiment with new builds, push the limits of your skill or for the sake of completing the story, then Hades is for you. But if you are the type that strictly cannot replay a game once the last level is "finished", then Hades may not be for you.

Personally, I had a lot of fun with Hades just experimenting with different builds. When you finally manage to form that perfect build, a result of both your individual choices and some luck, it feels fantastic. It’s short lived because you’re already thinking of new combinations to utterly decimate your foes on your next run.

Hades seems to have perfected the roguelite formula. It has significantly raised the bar for roguelites that follow and will remain a benchmark for years to come.